We had the opportunity to be featured on Button & Bly’s Travel Show recently. Here’s the making of the “Flaws” video.

My cover of Sia’s “Chandelier”

Mr. Christmas is now streaming on vimeo. Any music is you hear was composed or arranged by me.

A-Designs Audio and Electrodyne Audio used my music in some recent press!

Great big ol’ thanks to Peter at A-Designs Audio for being so supportive over the past 3 years. They used my music in some recent press. Check it out!

“Wanting To Be There”

Song I wrote and recorded for all of my friends and family who live far away and are unable to come to shows. Thanks for your continued support! Enjoy!

“Goodbye Summer,” the new single by my good friend and regular partner in crime Dom Liberati is now available for download. You can find it on iTunes as of October 8, 2013 or you can grab it here now. https://domliberati.bandcamp.com/track/goodbye-summer Enjoy!

LOS ANGELES – November 2012 — Directed by Nick Palmer, Mr. Christmas is a new independent documentary film about Concord, California’s Bruce Mertz, a man who both figuratively and literally brightens his community each December with the 50,000-plus lights decorating his house. Already sweeping up awards at film festivals in Aspen, Philadelphia, Palm Springs and Providence, the short 15-minute documentary features a score composed by Jim Briggs, who tracked all of the instrumentation through a collection of A-Designs Audio processors. 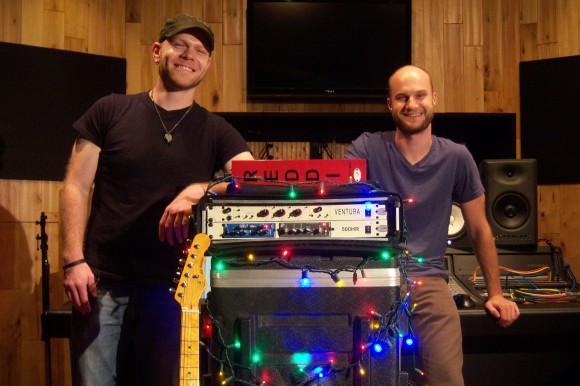 “I had just purchased the Ventura about a week before the sessions and couldn’t wait to use it,” Briggs recalls. “The parametric EQ on the Ventura was a total lifesaver, especially on the banjo. Don’t get me wrong; I love the banjo, but it can sound a little bit… well… like a banjo. With the Ventura, we were able to get it to sit perfectly with the guitar and bass without ever-so-tenderly pounding an ice pick into your ear.”

Although Briggs had acquired the Ventura just prior to the Mr. Christmas sessions, he has been enjoying other A-Designs products for much longer. “I’ve had my REDDI for about two years now and mostly use it live for acoustic guitar as I spend more time on stage than in the studio,” he says. “I’ve also leant it to many a bass player, several of whom have ended up buying one.”

“I also really like the BAC-500, which I first heard about from Joshua Aaron at AudioLot Studios in Hollywood. He was using it on a Fender Jazz Bass and I loved how it colored his sound. Since then I have discovered that I like what it does on everything, literally all the time. It can do things to a snare drum that will keep you up at night.”

“Although I’m certainly more of a musician than an engineer, whenever I go into studios to record, I always take my A-Designs gear with me. I’ll plunk them down in the control room–if they’re not already there–and say, ‘Here, we’re using these.’ Not surprisingly, I’ve never had any objections.”

For more information on Mr. Christmas, visit www.mrchristmasmovie.com or www.facebook.com/MrXmasMovie.

Other than reaching 110° in Northern Los Angeles, it’s been a good day. Two updates.

First of all, Stealing Heather just released their new music video, “Can’t See You.” It’s been over a year in the making but we’re proud to present it.

Thang two, Dom Liberati released an E.P. to donors of his recent PledgeMusic campaign. Though not commercially available, below is a track mixed by Tony Shepperd featuring myself and Tony Solis on guitar.